Moving the Communitree sculpture was an adventure.  It had been stored in a basement which was once a paper mill - and the egress was a steep ramp with doors that were significantly lower than the height of the piece.  Somehow we got it out having lowered the branches - the tree is now a conifer having previously been deciduous!  I drive a Subaru Forester and we put down the seats and somehow got most of the sculpture in - several feet hung out the back -the green thing at the top is the flag we used to be vaguely traffic compliant when I drove across town with the hatch tied mostly closed.  The elevator was not as tall as the tree either (gallery not at ground level of course) so we somehow diagonally got the piece in.  This all brings back painful memories of transporting large pieces on buses in art school....and reminds me why I generally size my work based on the largest size I can conveniently fit in my car!.


Between Sara Adlerstein (gallery director) and Dave - the SNRE's photographer - whose last name I need to get - I had  a lot of kind and competent help installing.  Never a given and much appreciated!


For a relatively small show - 5 large monotypes and one large sculpture - this show was more challenging to install than some, largely because of the difficulty of moving the sculpture.  The Communitree is a piece that was done last summer as a collaborative piece funded by Annarbor.com and the Street Art Fair.  Many hundreds of people were involved in building it over about a week during the summer.  Now it will continue to grow and evolve at the School of Natural Resources.

The opening for this show is tomorrow - Feb 16 at 4pm.  Gallery director Sara Adlerstein and I will both be speaking about the gallery - this is the inaugural show for the Art & the Environment Gallery at the School of Natural Resources and the Environment - and about the work in particular.
on February 15, 2012 No comments:

Email ThisBlogThis!Share to TwitterShare to FacebookShare to Pinterest
Labels: encaustic monotypes, School of Natural Resources and the Environment, Watershed Moments

These are more of the current series of large encaustic monotypes.  I haven't written much about the process of making these one-off prints.  A monotype, as opposed to a monoprint, is made as a unique piece through a print process (monoprints have repeatable elements like stencils).  I work on a heated surface - a hotbox, as developed by Paula Roland.  I use a sheet of galvanized steel (many artists use anodized aluminum), heated with 4 100w light bulbs in an enclosure of insulated wood which I built. For these large prints I actually use two hot boxes under one large sheet of metal - so 8 bulbs total.  I paint directly on the metal surface with a mix of encaustic and pigment sticks and then make a single print using a variety of papers.  This is the point where the pieces can diverge from a classical monotype because I often work back into the piece with graphite, pastels (both soft and oil), conte or add collage elements.

My upcoming show at UM has been publicized at Montage - the U's arts portal and at the School of Natural Resources' site.
on February 05, 2012 No comments:

This series of monotypes is part of my ongoing exploration of river movement.  These are far and away the biggest monotypes I've done - they're all 25" x 50" on kozo.  They all incorporate encaustc, graphite, pigment sticks, conte and other drawing media.

Like all of my recent monotypes they are strongly influenced by both my connection with the environment AND with the music I've been listening to in the studio.  WEMU plays jazz and blues during my studio hours and that sets the mood and the motion for the work.

These five pieces will be the inaugural show at the new Art & the Environment Gallery at the School of Natural Resources at the University of Michigan.  The opening will be Thursday Feb 16 at 4pm. 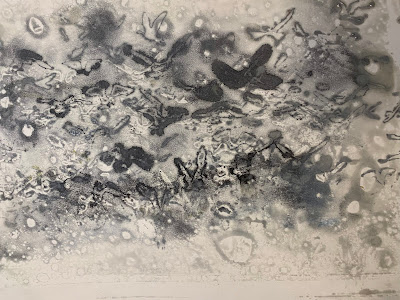